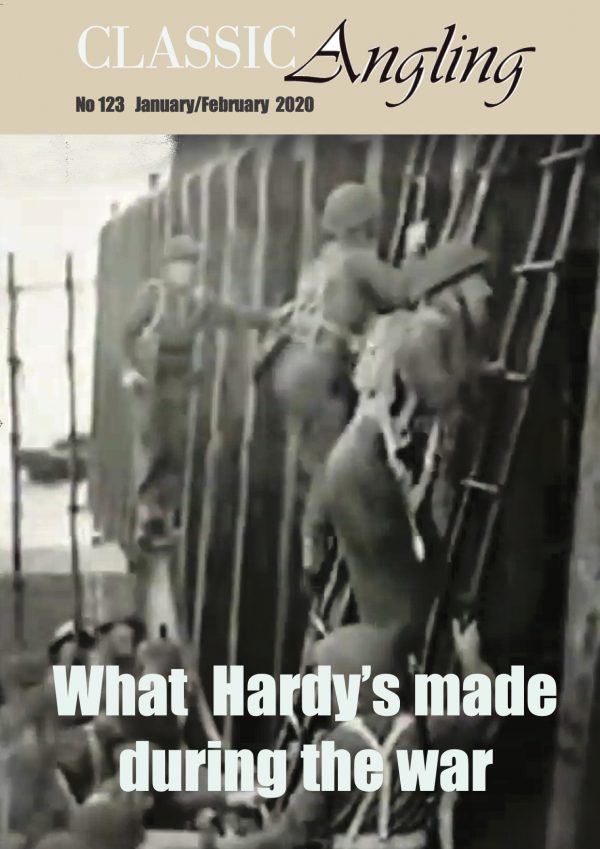 COVER STORY: The Second World War was disastrous for fishing tackle firms. We reveal how Hardy’s managed to survive those testing six years.

* There is considerable confusion about which taxidermist produced cased fish for Hardy Brothers, we reveal in an excerpt from a forthcoming book.

* TK Wilson was a blunt Yorkshireman whose wise words in books and magazines had a considerable influence on trout-fishing methods.

* Any item of tackle containing ivory could prove highly problematic under new rules designed to halt the trade in illegal imports of the material.

* The history of the London Flyfishers’ Club has won Classic Angling’s Book of the Year award, with Hardy’s Salmon Flies running it close, judges said.

* The river Tweed is to get its own museum, which will be dedicated to the famed river’s salmon-fishing history.

* Berkley Bedell, the man who created what is now the world’s largest fishing tackle company, has died aged 95.

* The Trump administration is seeking to undo a law that protects 17,000 miles of rivers and lakes in Alaska.

* Auction house Mullock’s is planning to run a total of five angling-related sales in the coming year.

* John Bailey starts to experience intimations of mortality and begins to wonder what growing old will mean.

* Neil Freeman looks at how chalkstream attitudes towards pike and grayling have changed over the years.

* The fifth volume of Ernest Hemingway’s letters, covering his big-game fishing, will be published later this year.

* Jerry McGinnis, Co-owner of BASS and a man who pioneered the way in angling television programmes, has died aged 82.

* Top collector David Petty has written a book that pays homage to the finest coarse fishing rods made of split cane.

PLUS: events, letters, book reviews and much, much more.