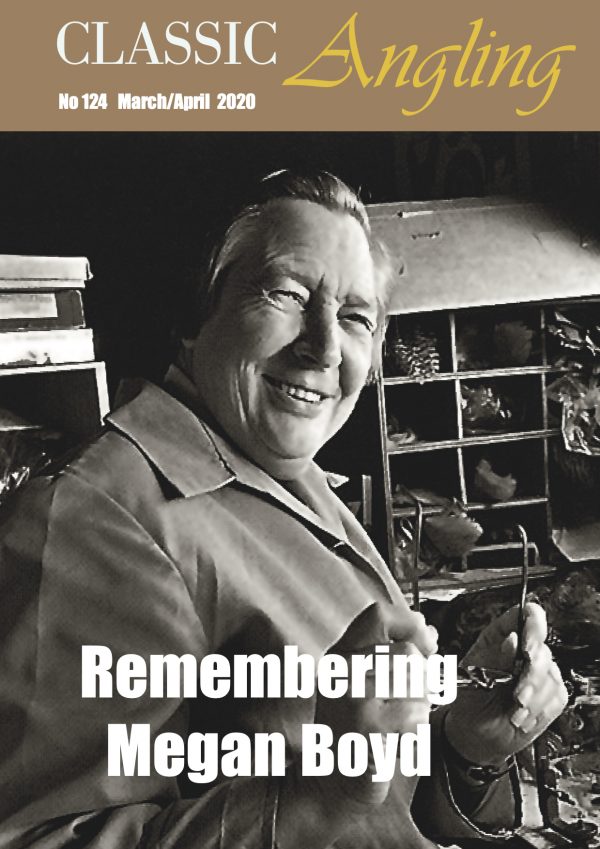 COVER STORY: We are leading the way to establish a memorial in Brora, the Scottish village where Megan Boyd, one of the greatest salmon fly tyers of all time, spent her entire life.
* A 1950s Royal typewriter used by Ernest Hemingway has just sold at auction for $27,500 – excluding 25% commission.
* The Chinese paddlefish, which has survived on earth for 200 million years, has been made extinct – by man.
* Iwan Garay’s many inventions have helped thousands of anglers to catch more fish. We look at his creations and his oddball reel collection.
* The Dorset Stour was once a fine salmon river, producing several fish over 40lb. But catches suddenly plummeted, We look at why – and see some hope for the future.
* The extra-large centrepin built by Richard Walker for BB has been sold for nearly £8000. It is the earliest piece of Walker-made tackle.
* Sir Wilmot Fysh, the founder of Qantas, lived up to his surname by travelling the world as an ardent (though not terribly successful) angler.
* Malloch’s of Perth, one of the great fishing shops, has closed its doors after nearly 150 years of trading.
* We look at the fishing-mad solicitor who popularised the Norfolk Broads with his writing and photographs.

* John Drewett pays tribute to Raymond Humble, one of the greatest Hardy reelmakers.
* Links between Alaska’s governor and the company seeking mining rights that would threaten the state’s huge salmon run have been uncovered.
* Neil Freeman highlights the scandal of the river Test’s lowest pool catching most of the river’s salmon.
* Trying to make sense of 1instructinos for fly-making in the 1800s was almost impossible, with a confusion of part names and total inconsistency on how these were presented.
* A rare Allcock mahseer Aerial with a fascinating history that its owner bought for 10 cents is on sale. But it will cost you a bit more than that…
PLUS: events, letters, book reviews and much, much more.