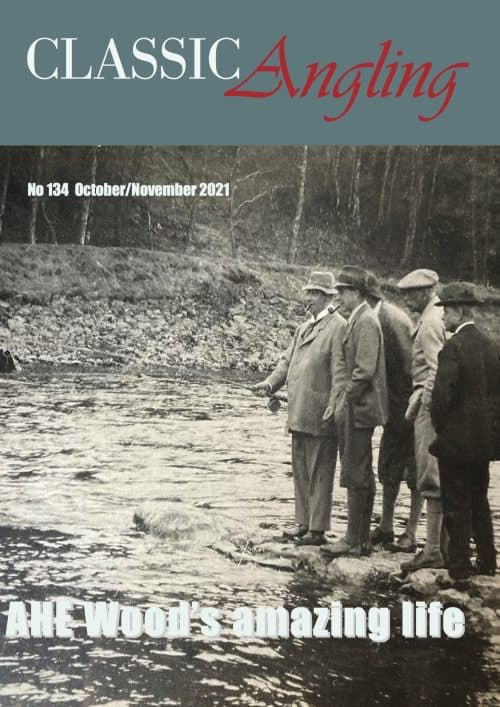 In the latest edition of Classic Angling:

AHE Wood is renowned as the inventor of the floating line for salmon fishing, but there was much more to him. For example, he raced yachts, won prizes for beekeeping and was a director of Daimler Cars.

…but Henry Giles has doubts about whether Arthur Wood
really caught all his thousands of salmon on a floating line.

The appearance of a gold Mitchell 300 and a ‘White Lady’ DL at auction has been labelled as ‘the most significant Mitchell find of the past 25 years’.

A Mark IV carp rod given by Richard Walker to Col John MacLean, who allowed Walker and members of the Carp Catchers’ club to fish Redmire Pool, is up for sale at £10,000.

Chocolate mahseer have been named as Sikkim’s state fish. The move by the north-east Indian state aims to protect the fish. But is it really a true mahseer?

Ex-US President Barack Obama said it was critical to protect Alaska’s Bristol Bay, home to the world’s largest salmon run. Now there is now renewed hope that mining will never be allowed there.

A Hardy Cascapedia that sold for £17,000 was just one of the highlights at Angling Auctions’ latest sale. Will the spectacular results force auctioneer Neil Freeman to continue with online sales?

Attempts were made during the Second World War to wean the public onto the dubious delights of eating canned perch trapped in their thousands from Windermere in the English Lake District.

A lionfish caught off the Dorset coast has raised fears about the spread of the venomous fish, which are already colonising large parts of the Mediterranean.

Keith Arthur recalls his first visit to the famous Royalty Fishery on the Hampshire Avon, and how he caught a fish worthy of being weighed on the famed Royalty scales.

The very rare Himalayan snow trout is under serious threat from invasive brown trout that are colonising much of its territory.

We look at the life and times of the renowned split-cane rodmaker Harold ‘Pinky’ Gillum. He died in 1966 and his rods are now among the most expensive in the world.

A 7ft-high oil painting of John James Hardy, arguably the most innovative of all the famous family, comes up for sale at Mullock’s next online auction.

Jeff Della Mura, a marketing expert and author of the book Hooked on Floats, gives some advice to would-be authors thinking of publishing books on angling history or tackle collecting.

John Stephenson acquires two very rarely seen Hardy rods from the 1960s that he believes have slipped under collectors’ radar.

We publish the very first piece of fiction to appear in the magazine: the story of an art gallery preparing an exhibition entitled A River Runs Through It.

Ten reels topped the $10,000 mark at the most spectacular Lang’s sale since the Ganung family took over the auction house in 2002.

Neil Freeman tells of the amazing sport that he enjoyed for huge marlin in the earliest days of big-game fishing off Madeira.

John Bailey recounts the day on India’s river Ganges that changed forever his attitude towards the place of fishing in the world.

Our books pages look at works on huge mahseer, the
reelmaker JW Young, tench and dry-fly for grayling.