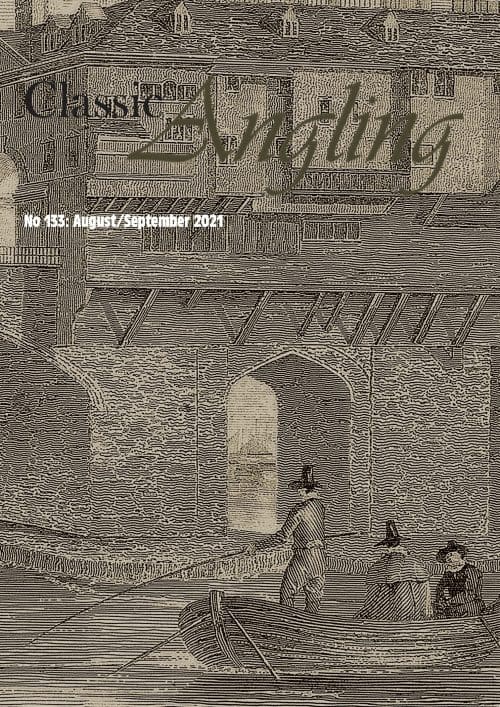 In this edition of Classic Angling:

One of two centrepins made by Richard Walker has just been reunited with its twin reel – but the new owner had to pay £10,000 for it.

Neil Freeman is horrified by a plan to force clubs and water owners to stock only 2lb trout on Hampshire and Wiltshire chalkstreams.

Fly-tying vices made by Lawrence Waldron have become hot items, with one selling on eBay for £5000.

Richard Barder, father of rodmaker Edward Barder, has died aged 83. A world authority on clocks, Richard led an eventful life that included landing a 33lb pike in a trout net.

An estate with two miles of the upper river Itchen famed for its wild brown trout and links to GEM Skues is up for sale at £5m.

The Jockey Club has issued a limited-edition set of salmon flies to celebrate the Cheltenham Gold Cup. They are in the colours of jockeys who rode the event’s most famous horses.

Things didn’t go according to plan when Universal Studios tried to recreate the thrills of the Jaws movie in a scary ride at its theme park in Florida.

The world’s biggest river restoration project is set to clear the way for steelhead and salmon to run the Klamath river in California for the first time in 100 years.

The Dutch reelmaker Ari t’ Hart, whose Remco reel won a place in New York’s Museum of Modern Art, has died aged 86. He was famed for his innovative but practical designs.

John Mitchell recounts the rise and rise throughout the world of the Finnish luremaker Rapala between 1963 and 197, and how it beat off its challengers.

Our campaign to win recognition for the great Scottish salmon fly tyer Megan Boyd in her home village of Brora appears to be making significant progress.

A ‘ghost fish’ carved by Hank Janner of Michigan was the star lot at a US decoy auction, selling for $95,000. And it was not the only fish decoy to make big money…

Duncan Hall added a touch of spice to a five-day trip abroad by inventing an Icelandic Macnab, which involved catching a salmon, an arctic char, a brown trout and a cod.

The Rev William Daniel, author of the popular 1801 work Rural Sports, was accused of spending too much time fishing.

A very early multiplying reel, made by the London firm of Onesimus Ustonson sometime pre-1820, is one of the prize items in a star-studded Angling Auctions online sale.

If you feel it’s time to upgrade your fishing pliers, how about a space-ace set that is selling for a mere $699?

All Our Yesterdays reveals details of a 103lb Scottish salmon that was netted in the mouth of Scotland’s river Forth estuary.

The UK is planning to expand its ban on products containing ivory to include species bearing ivory such as walruses, hippos, narwhal and sperm whales.

A new column reveals details of an amazing discovery of an Orvis treasure trove that Steve Woit uncovered on eBay.

Our books pages review works on the river Thames, Bernard Venables’ writings, the genesis of salmon flies and when the iconic Mitchell 300 was really launched.